I’ve been trying out a few things for the ginger & garlic sausage bricks Walden sells, and have had good success making it into wontons! Specifically wonton soup. I know it looks like a lot, but it’s not that bad - you make the wontons, you simmer some broth, you boil some water for cooking greens/wontons/noodles, you put the greens/wontons/noodles in bowls and ladle broth over them, then garnish and serve. This recipe is based off ones from Recipe Tin Eats and The Omnivore’s Cookbook, but has a few tweaks of my own.

For this, you’ll want to buy wonton wrappers, Chinese style egg noodles (sometimes packed as wonton noodles), and Asian style chicken broth. You can sub in angel hair if you can’t find the egg noodles. For the broth, if you can’t find the clear, deep yellow Asian kind of broth, you can use another clear chicken broth. You could also use bone broth if it’s light and clear, or even make your own broth with chicken backs/necks/feet plus some thighs or split breasts and aromatics like scallion, ginger, shallot, and garlic.

I also used garlic chives because their pungent aromatic flavor can stand up to the sausage, but if you can’t find them, use more scallion plus a minced garlic clove or use a spring onion or two.

First make wontons! Mix all these together:

Set up a workspace with the bowl of filling with a small spoon (a teaspoon or something like that), a little bowl of water, a pack of wrappers (40 per pack), and a baking sheet lined with parchment paper. You can do a second pack of wrappers if you want to make more, smaller wontons. Using the spoon, put a little filling in a wrapper, wet 3 sides of the wrapper, fold it up into a rectangle and press to seal. Press out any air bubbles, then roll the filling towards the sealed long side, then grab the two folded corners and pull them together to overlap them. Wet them, then press them together. Just One Cookbook has a good wonton recipe with pictures if this explanation was confusing! Set each wonton on the tray. You should end up with 40 or so wontons. You’ll cook the ones you need (4-6 per person for an appetizer, 10 or more for a meal), then freeze the rest on their tray - after an hour in the freezer you can take them off the tray and put them in a ziploc to store them more easily.

Simmer it for 10 mins, then take out the aromatics. To make your life easier, you can tie the first 3 aromatics there into a little cheesecloth sachet to remove them easily.

Meanwhile bring a pot of water to boil and set out soup bowls for serving. Get yourself some leafy greens, such as baby bok choy, Shanghai bok choy, choy sum, spinach, chard… blanch these leaves in the boiling water for a minute or so (more for studier ones, less for delicate ones), then take them out and divide them up between bowls. Add wontons to the water (careful not to crowd the pot too much - do more than one batch if you need to), and when they float, they’re done, which should take a minute or two for small ones and 2-3 mins for bigger ones. Take them out as well and set them into the bowls too. Finally, cook your noodles in the boiling water and drain them, then divide between the bowls as well. Ladle broth into the bowls, and garnish with those scallion greens. You can also add spoonful of hot chili oil. Eat while it’s hot, before the wontons and noodles get soggy!

To cook wontons from frozen, add frozen wontons to boiling water and stir gently to make sure they don’t stick. Bring the water back to a boil and cover the pot, leaving a gap. Cook for 2-3 minutes for small wontons, another minute for bigger ones, then uncover the pot. Cook another minute.

Thank you so much for sharing! This sounds absolutely delicious and a perfect use for the sausage bricks! A great point that you can make the wontons and freeze them for later use

Oh believe me, my chest freezer gets a workout!

This is awesome @rykilde! We also did a wonton writeup here if anyone wants some tips on folding:
Walden Wonton Recipe

I was surprised with how easy these were - the largest time sink is the folding, but well worth the result 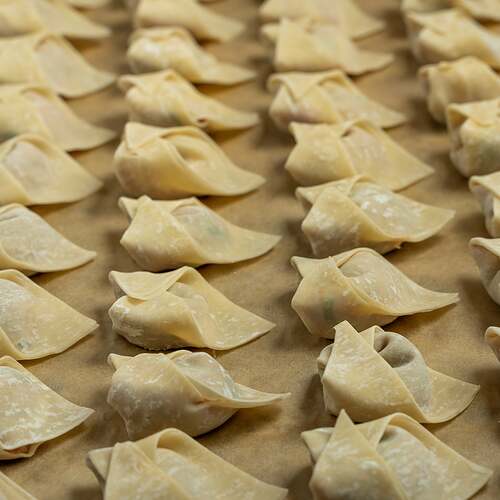