Resources for installing a bat box

I recently spent some time looking into bat boxes to help control mosquitoes in the yard, and made a couple of surprising discoveries (at least for me). I’ll summarize a couple key takeaways. More resources at the bottom:

There are lots of designs out there online for you DIY’ers, this one is from Belmont’s homeowner guide for bats. I’ll post some updates once I get mine up, but curious to hear about other people’s experiences! I know some other Waldeneers have also been looking into it too (@Katie!) 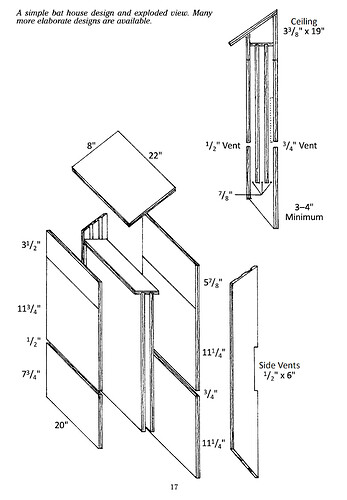 Very cool - I didn’t even know bat boxes were a thing. My family sells Mason Bee kits, and it’s a similar concept. Giving a habitat to some of our local neighbors.
What would be REALLY interesting is installing a small camera in there so you could peek and see who moves in

Did you build your bat box yet? Did a family of bats move in? Are you now bug-free or a vampire? Tell us how it went!

We’ve been meaning to do this for a good while. I know we have bats in the area already and would love to support them further.

thanks for the awesome information.