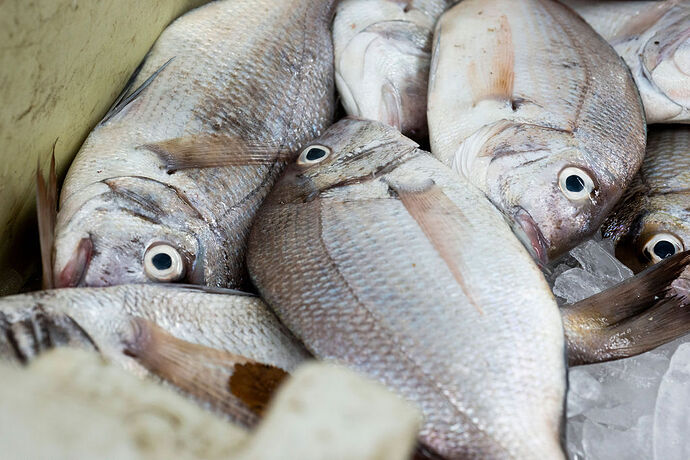 1024×684 137 KB
Fish are our last wild food. However, the seafood industry is fraught with problems that affect the future of both fish populations and the men and women out on the water. Many international commercial fishing conglomerates have a bad reputation for pollution, disregard of fish stock regulations, and even face reports of slave labor. Here at Walden, we recognize that fishing and seafood are part of our local New England and Mid-Atlantic heritage. We also know that responsible sourcing can help maintain healthy fish stocks for generations to come. We choose our seafood partners carefully, guided by the principles of preservation—both ecologically and economically. 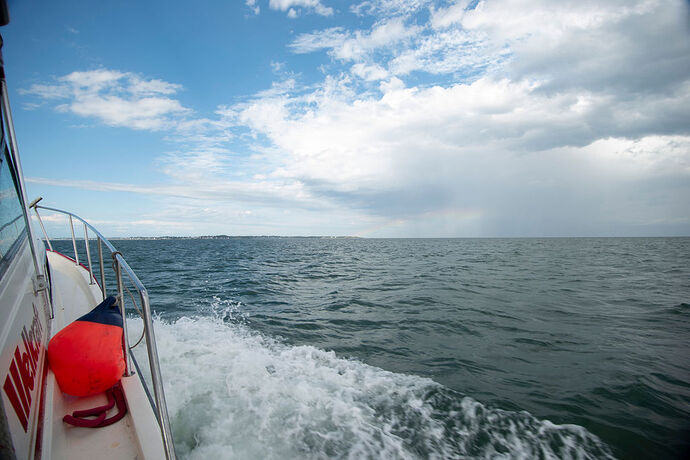 Here is a list of four questions we consider when selecting our seafood choices each month. If you are concerned about the industry’s future and the ocean’s ecology, we think these are great things to keep in mind no matter where you source your seafood.

WHO CAUGHT MY CATCH?

Despite living in New England—with some of the most vibrant fishing communities in the country—the seafood in your supermarket probably wasn’t pulled off a small boat docked in Gloucester, MA, or anywhere else in the United States.

As much as 32 percent of the wild-caught seafood we eat in the United States was caught illegally—violating environmental and labor laws—with insufficient chain of custody documentation, and inadequate resources and instruments set up to catch these shipments. 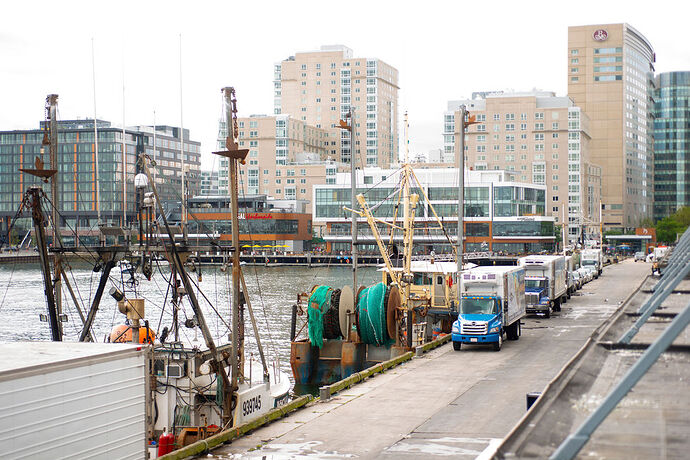 And if you think this inscrutability makes it hard to be a seafood consumer, it’s even harder to make an honest living as a fisherman. The influx of cheap international seafood into the local market undercuts the dockside prices unscrupulous seafood-buying agents are willing to offer. Pollution, global warming, and unethical overfishing have reduced the available populations of fish that were once abundant.

Red’s Best—a Walden’s supplier of seafood—was created in 2008 to combat the unsustainable conditions for the men and women who work in the modern New England fishing industry. Red’s is a network of small fishing fleets joined together to support local fishing communities. By banding together and aggregating catches, Red’s helps the men and women operating small fishing fleets increase their bargaining power, which results in better conditions and pay. 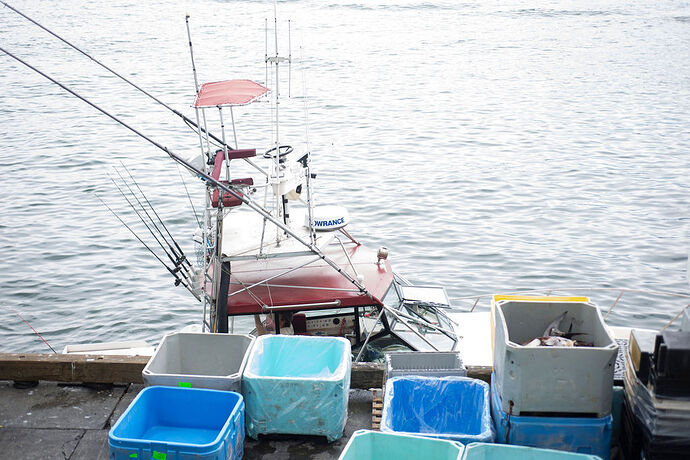 A fisherman pulls up on Boston Fish pier to sell their catch of the day to Red’s Best. 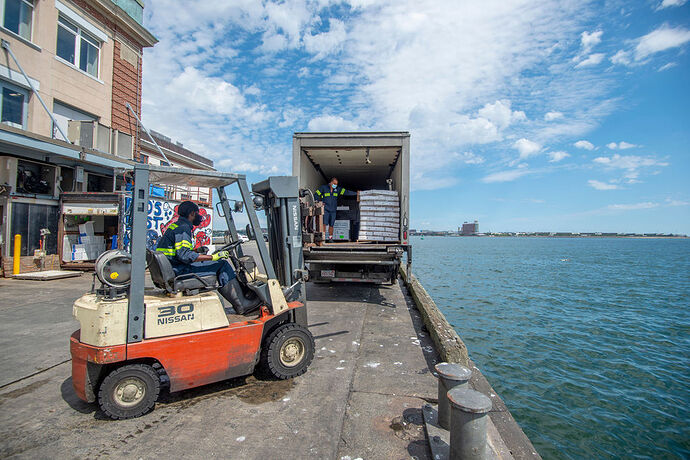 1024×684 175 KB
When you buy seafood from Walden, you can be sure that it comes from community-based collectives such as Red’s Best. If you can’t source from Walden, be sure to buy American. Since the 1996 Sustainable Fisheries Act, regulators are required to identify fish with dwindling numbers, set stock rebuilding target goals, and create a clear definition of overfishing. The US system isn’t perfect, but it’s still the second-best in the world, per the Coastal Governance Index released by The Economist in 2019.

WHERE WAS MY SEAFOOD CAUGHT?

Despite having more coastal fishing waters than any other country, as much as 90 percent of the seafood eaten in the US is imported from thousands of miles away. Even worse, according to Paul Greenberg, author of Four Fish and American Catch: The Fight for Our Local Seafood , some of that seafood imported from Asia and South America was actually caught by fishing boats from the US, shipped internationally, frozen, and shipped back to us to eat.

“Because of the endless trans-shipping of fish flesh from small vessels to freezer ships to processing plants, back and forth across huge swaths of water, it is common for an American fish to be caught in the United States, frozen whole, and sent to China, where it is defrosted, boned, refrozen, and sent back to the states double frozen,” according to Greenberg. “Triple and quadruple freezing also occurs.” 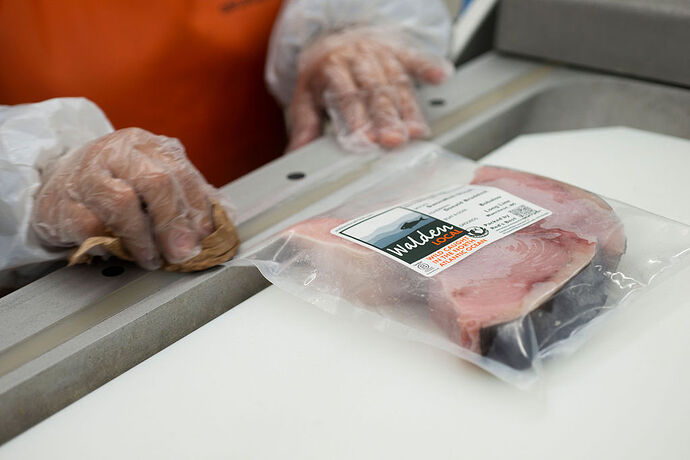 Walden label that shows you the name of the fisherman that caught your seafood and where it was sourced.

The QR code on a package of Walden seafood represents an unbroken chain of custody that can be traced through shipping, labeling, packaging, and processing back to the person on the boat that caught your dinner. Supporting suppliers that have a reputation for honesty and data that backs up their claims will help you choose an option caught in local waters by local fishing outfits, which benefits local communities. Plus, local fish are better for the environment, and you are more likely to get a fresher and better-tasting product. 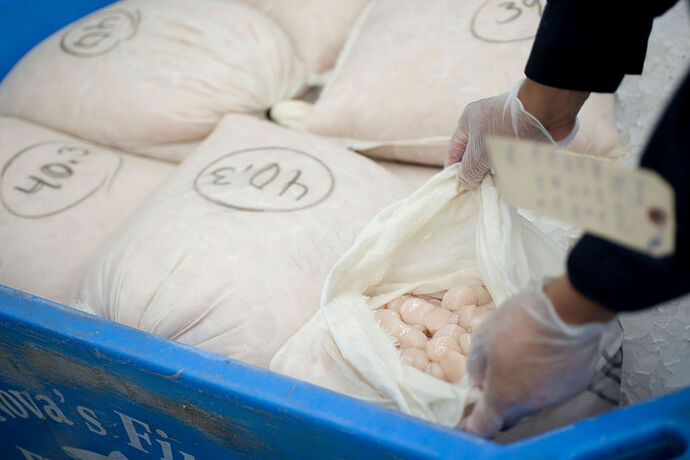 Sea Scallops coming in to be processed.

IS MY FISH A SUSTAINABLE CHOICE?

The cold North Atlantic waters were once home to a seemingly never-ending supply of fish—the Grand Banks of Newfoundland alone was said to contain 2 billion cod. Today, 80 percent of cod in the Gulf of Maine have been depleted, according to readings conducted by Massachusetts legislators in 2016. Wild Atlantic salmon are more or less commercially extinct as well, now only available in farmed versions.

If you are unsure about a fish’s status, the National Oceanic and Atmospheric Administration’s (NOAA) FishWatch site can help. FishWatch provides a quick and easy method of determining whether your fish is a responsible choice based on population, habitat impacts, bycatch, and fishing rate. There’s also information about taste, texture, and even health facts and recipes to help you decide if a seafood choice is right for you. 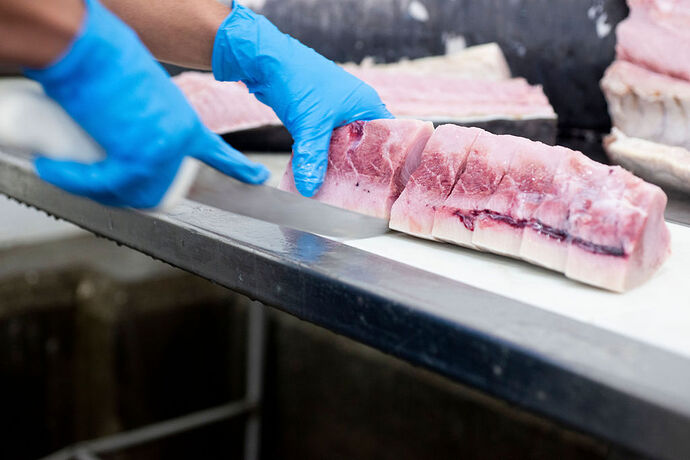 Here at Walden, we curate our monthly selection of available seafood based on many environmental considerations. Here are three that you can consider when purchasing fish:

IS IT AN OVERFISHED SPECIES ?

Shrimp, salmon, and canned tuna represent more than 55 percent of all seafood consumed in the US. The best way to increase the sustainability of your seafood choices is to diversify the seafood you choose to eat. Northern porgy or scup, Atlantic scallops, and halibut represent some great tasting, local, and sustainable choices. At Walden, we always try to add lesser-known, great-tasting options to our monthly specials to expand your seafood palate. We’re always here and happy to answer any questions you may have about taste, recipes, or cooking methods for unfamiliar seafood. 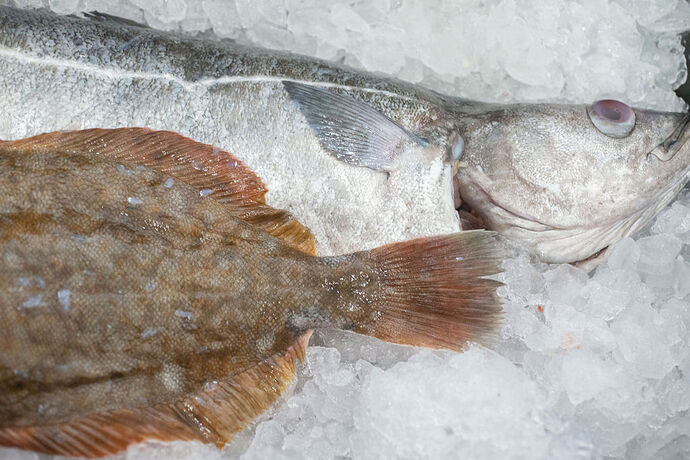 The North Atlantic sea is plentiful of a variety of fish types.

IS IT IN SEASON?

You shouldn’t see fresh Maryland Blue crabs in February, three months after the season ended. Nor should you see fresh Montauk tuna when the Montauk harbor is iced over and no tuna boats are leaving port, according to Greenberg. Overfishing during a fish species off-season depletes the breeding population, risking recovery. At Walden, all of our fish is caught in season, then flash frozen and vacuum sealed at peak freshness. 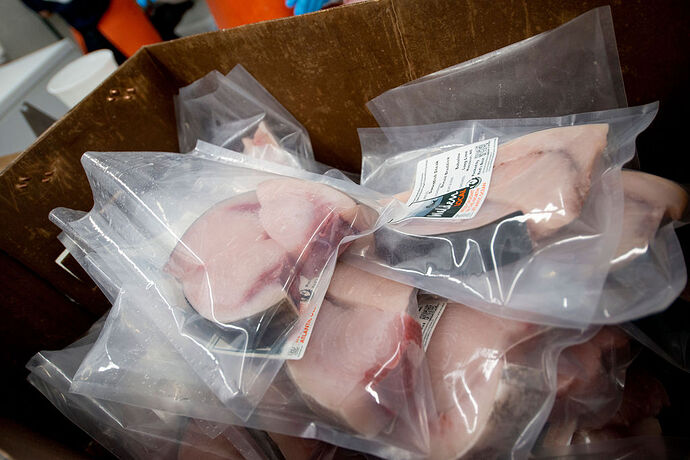 Swordfish steaks ready to be sealed at Red’s Best.

Fish farms can create a lot of pollution by clustering so many animals in such a small place. Farms also use extraordinary amounts of wild fish as feed. At Walden, all of our fish are caught wild.

That said, aquaculture, or fish farming, techniques have become more sustainable over the years. As wild-caught fishing supplies become more taxed, there is increasing pressure on the aquaculture industry to clean up its act. Farmed filter feeders, such as oysters and mussels, clean coastal waters as they feed on microorganisms such as plankton. A single oyster filters clean as much as 50 gallons of water a day, removing nitrogen and other harmful pollutants from the water. If you are considering mussels or oysters, look to see if there are farmed options available that serve the dual purpose of cleaning US coastlines while they grow. 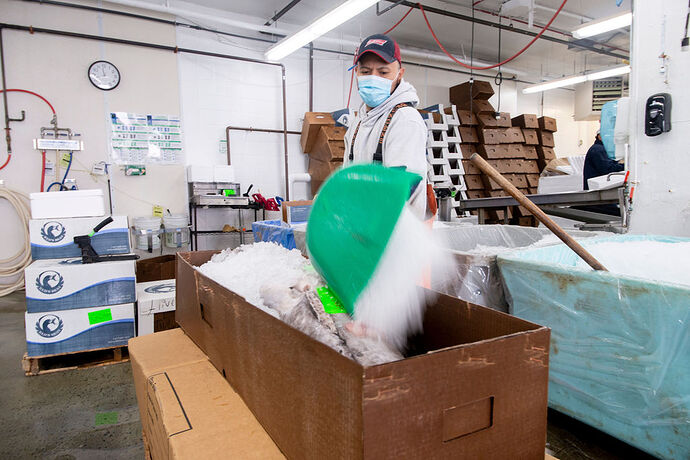 Red’s Best keeping it fresh with lots of ice.

HOW DOES IT TASTE?

It’s got to taste good, or else what’s the point? Walden members are getting fish that were flash-frozen and vacuum-sealed at peak freshness. There are abundant varieties of great tasting fish coming from North Atlantic waters. Quincy Bay outside of Boston was once the flounder capital of the world, with Winter Flounder still available and considered a smart seafood choice by FishWatch. Adding Whiting, Striped Bass, or Flounder to your rotation of Cod and Haddock will diversify your intake and provide some new flavors to explore. 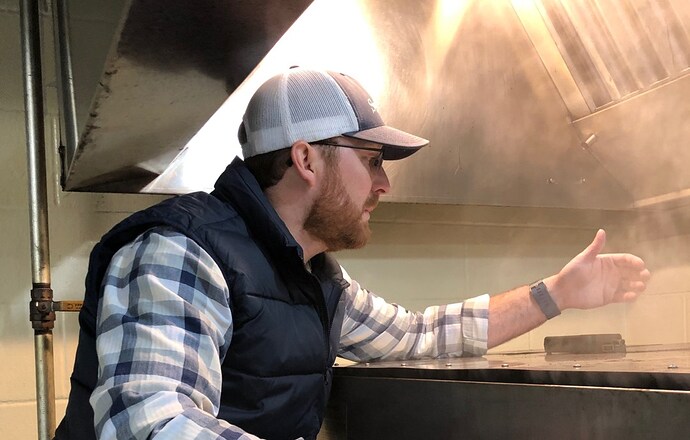 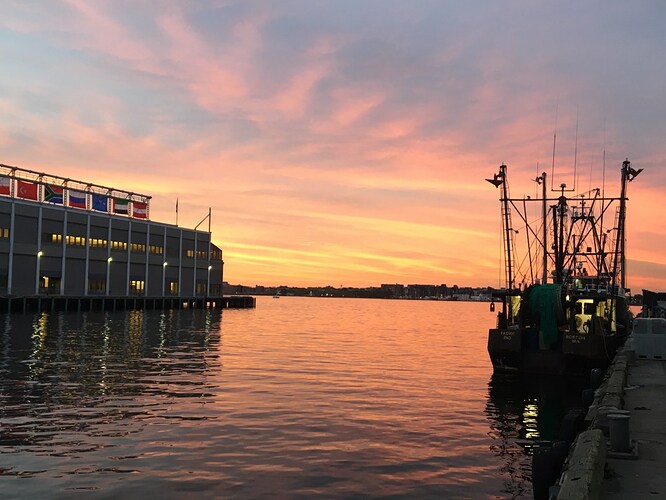 Seafood is perhaps the hardest food to source if you are concerned for the environment and local fishing communities that rely on the seafood industry to survive. Here at Walden, we try to do some of that work for you by only providing choices that meet our stringent standards. If you have a question about your seafood, drop us an email at members@waldenlocalmeat.com, we’re happy to help.

As always, thanks for supporting local grass-fed, pasture-raised meat, and sustainably sourced seafood.

Cullen skink, one of Scotland’s most famous dishes, is a hearty soup that is traditionally made with smoked haddock. Named from Cullen, the fishing town in Scotland that this soup hails from, this soup is great as a starter or a meal on its own.